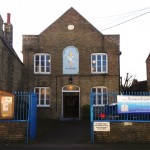 Regular non-conformist meetings started when Mr Coxe Feary first preached in Somersham on 17th May 1786. That day he walked to

For some time meetings were held in the barn, till, numbers increasing, and the friends there decided to have a regular place of worship. Ground therefore was purchased, and a ‘very neat’ meeting-house erected, which was opened in the spring of 1812. 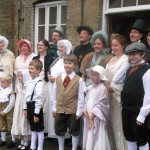 Mr Fuller, of Kettering, preached a very encouraging sermon at Somersham, from Zech. iv. 10, ‘Who hath despised the day of small things? ‘ The congregation was so large in the afternoon, that it was thought expedient to have the service in a close.

We celebrated our 200th anniversary in May 2012 by a parade through the streets in period costume, followed by a meeting at the church when a portion of the original sermon was preached. In the evening we celebrated at the Victory Hall with a barn dance.